During the early dating period, many times we feel somewhat unsure of where we stand with another person. When we feel this way, the best method to know where we stand, is to simply communicate our feelings to the other person. Now, if you’re an old fashioned woman or just an old-fashioned type like me, you might want to let the man take the lead in the beginning. That is, unless he takes too long to step up to bat.

It’s good to know what you want in another person, and have some idea of what works for you and what doesn’t in a relationship. But during early dating, you need to take the time to get to know someone before becoming exclusive. This is why it’s imperative to not only ask questions during the first few dates, but to ask the right types of questions about things that you feel are “must-haves” for you. As well, if you’re the type of woman who goes after what she wants, old-fashioned or not, letting nothing stand in her way—not pride, not ego, nothing, then communicate to the person how you’re feeling and ask them directly, “Where do we stand?”

Sometimes being too forward or asking things like “where do we stand” too soon, might be construed as a turn off to some people. But depending on your own personality and how you feel about being direct and getting what you want, and despite those old-fashioned tendencies that many of us have, there’s nothing wrong with being direct and taking the initiative and asking questions to find out if you’re on the same page.

Knowing how someone feels about you shouldn’t have to be a guessing game, and the same thing goes for knowing where you stand with someone. I can’t sit here and tell anyone exactly what to do or how to act. Well, I can, but then some people would probably get upset with me if things didn’t work out to their liking. However, I can tell you this, I feel that it’s best for a man to take the initiative after a few dates when he’s interested. He should bring up a conversation about exclusivity to see if the feeling is mutual so that you’re both on the same page.

Three dates with someone is long enough to know whether or not you know longer desire to date other people at the same time. We all want to feel special and be treated like a priority instead of an option or second choice. Having said that, not everyone is ready to be exclusive after a few dates. Therefore, if it takes a few more dates, there’s nothing wrong with that. The reasons that you or the other person might not be ready to be exclusive after a few dates might be a combination of a few things. You might not be asking each other the right types of questions, you might not be seeing each other enough, and you might not be getting to know one another on a deeper level so that you feel comfortable and ready to be in a n exclusive relationship.

The only way to know where you stand with someone is to talk with the person about it. Ask them how they feel and make sure that you’re on the same page. You need to have a conversation before becoming exclusive. And despite what some people think, it’s not an assumed thing just because you might’ve had a few good dates with someone, even if you feel good about it. As well, no one should be afraid to communicate their feelings or tell the other person what they want, to see if they’re on the same page or even to make sure that they’re going at the same comfortable pace.

As far as how long it takes to know that you like someone, it really depends on the person. But if you ask me, I’d say within the first 15 seconds of meeting someone face-to-face, you know whether or not you’re immediately attracted to a person out. And then once they speak, that attraction either grows or diminishes. But generally, after one date, you know whether or not you want to see someone again, whether they’re what you’d consider “normal,” the type of person you’re looking for, or even marriage material.

After one date, we can usually get a pretty good idea about a person. We can usually tell whether or not we’d like to see them again, if we’re willing to explore the situation further, or even if we’re totally incompatible. And after that first date, assuming that things go well and you both feel the same way as far as going out again, it usually takes about three dates to know whether or not you want to be exclusive–at least, if you’re following the 3 date rule.

Remember, the best way to get what you want in life, is to go after it. But first, you must know what you want. Secondly, don’t bottle up your feelings or be afraid to speak your mind and communicate how you feel to the other person. You see, if you’re doing that, you’re clearly not comfortable communicating to the other person or even in that situation altogether. Therefore, the person you’re dating might be the wrong match for you. We need to be comfortable in our own shoes, with how we speak, how we act, and how we communicate to others. And when it comes to dating or exploring relationships, we should love ourselves enough to be comfortable with who we are on such a deep level that we can be open about how we feel to the other person, share our feelings, our desires, our likes, dislikes, and the things that we want in life.

You should never have to force someone to want to be with you or to be exclusive with you, so it’s important to remember that if someone actually wants to be with you, you most likely won’t have to guess or even question it. When someone wants you bad enough, they usually make it clear by their gestures, their actions, and their words. As well, they’ll usually tend to want to see you more often, communicate with you as much as possible, and they’ll make the time for you—even if they’re more of the busy type. But to know where you stand with someone, you must have a conversation about it so that nothing is assumed, so that you’re on the same page, and so that you know that you’re going at the same comfortable pace.

One thought on “How to Know Where You Stand With Someone”

“I never dreamed about success, I worked for it.” 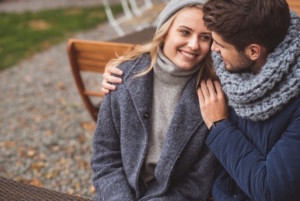 7 Must-Haves Before Starting a New Relationship
Things to be clear about before becoming exclusive.