In case you don’t know my view about the LA dating scene, let me put it to you in the nicest way possible, it sucks. I’m not jaded, but I’ve heard enough, I’ve seen enough, and there’s nothing more challenging than being single in LA. Yet still, I believe that there’s hopes for everyone in finding your best possible match, and your one true love.

Knowing how difficult dating can be whether you live in Los Angeles or anywhere else, most of us usually go on a certain amount of first dates before finding that one special someone. Many times you’ll go on a date where you’ll have the best time of your life and where the other person will claim to feel the same exact way that you do, but you’ll never hear from them again. Ah, the dilemma of being ghosted after a first date. Yep, now you see why it sucks!

We’ve all been there, and we’ve all had that perfect first date that ended before it began. I like to call them “one date wonders.” Everything was great, you were happy, they were happy, the conversation flowed, and there was even laughter between the two of you.

So why didn’t he call or plan a second date?

Well frankly, despite how people act and what they say on a first date with you, telling someone that they didn’t feel any chemistry or attraction to you is usually hard to do. As well, it’s one of the biggest reasons for not having a second date. Don’t get me wrong, because it’s not the only reason for why he or she didn’t call or ask you out again. They could have baggage, wounds from previous situations, or many other things that could have led to their disappearing act or even for their lack of interest.

There are many reasons why someone might not have wanted to date you more than once. The truth is though, it shouldn’t really matter to you very much, because if someone is interested enough, they’ll contact you and ask you out again. There are many excuses for why someone didn’t contact you after a first date. I definitely believe that men should take the lead during early dating.

But what happens when you don’t hear from the guy after that first, wonderful date?

Well, give them a few days, and if you still hear nothing back, I’d suggest moving on. But if you liked him or her all that much, feel free to send the person a text message or give them a phone call, and you can always leave a brief message there as well. There are NO RULES, so don’t waste your time on those that play them. Maturity is everything if you’re looking for an adult relationship. Either way, if the person is really not all that interested, they can choose to ignore you, and not to respond. No response is a response if you really think about it. You should want to be with someone that wants to be with you.

Many people have soft hearts and are too sensitive to let someone know that they weren’t interested. Meanwhile, although they might’ve known early on during your date with them that they weren’t interested, they might’ve played it off as if they were interested, just so that they wouldn’t hurt you. Honesty is always the best policy. I’ve never been a big fan of people that abruptly end a first date, unless something horrific happens, which would be a different story. But generally speaking, you should always make the most out of your dates, because you never know, you might even gain a new friend.

It’s always good to be cordial and kind to people, even when you’re not interested in them. So the next time that you go on a great first date and you never hear from the person again, don’t be too hard on yourself. Just know that they weren’t the right person for you and something was obviously missing on their end. You should desire to be with someone who truly wants to be with you. The right person will call, ask you out again, and ultimately, won’t let you go.

2 thoughts on “The One Date Wonder” 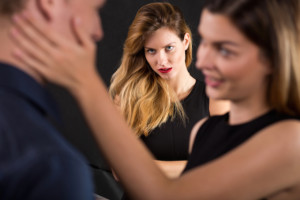 Is Monogamy a Delusion?
Not everyone cheats. Some people believe in being true to…