I was listening to KISS FM on the radio this morning as I was driving my kids to school, and “Ryan’s Roses” came on. I wanted to talk about the subject that they spoke about, because today, I totally disagreed with the final opinions of Ryan and Sisanie. During today’s episode, they spoke about a married couple that have been married for six years, and they have children together. The wife went out to go to a bridal shower, while that husband stayed at the house with their kids, while having another mother and her children come over for a play date for their children.

The wife gets home early, and finds that her husband and the mother of those kids are in their swimming pool chatting away. Did I mention that the woman was completely hot, and wearing one of those new fashion, two-piece bikinis. The kids were inside at the time, when the wife walked in, seeing the two in the pool. The kids were watching a movie or something on the television inside of the house.

This made the wife feel very uncomfortable, not only because the woman was completely hot and in a bikini with her husband, but because she felt that it was beyond inappropriate. She felt that perhaps they were cheating or doing something wrong as well, and she wanted to get to the bottom of it, so she called Ryan for this Ryan’s Roses episode.

Ryan, Sisanie, and the wife all thought that it was inappropriate that the husband was in the pool with the other mother without their children, and they even questioned why she was even in a bathing suit, as well as why the kids were inside without them. When Sisanie offered to give a free dozen roses to the husband, while pretending to be a florist, he sent the roses and the note to his wife, and not the mother of the other children, so that was a good thing. But we still have the dilemma of why did he make such a bad choice as to be in the swimming pool with another woman, and without the kids even being in the pool.

The husband completely denied cheating on his wife or that anything inappropriate was going on with the mother. Unfortunately, his approach of saying flattering statements of how that mother was completely beautiful probably shouldn’t have taken place, and his feelings as to how it was irrelevant, and it didn’t change his love for his wife was probably not the smartest of things that he could’ve said. However, he said what he felt, and he persistently said that he didn’t do anything inappropriate.

He mentioned that he was sorry for being in the pool, but that nothing had happened. However, Ryan, Sisanie, and the man’s wife didn’t accept what he did, his excuses, or his apology as adequate enough. Ryan definitely stayed strong in his belief that the man was lying through his teeth, and was obviously, completely cheating. At least, that’s how Ryan felt. Well, his wife felt like that as well. She simply didn’t accept the fact that what he did was okay, and she felt that nothing got resolved for making the call.

Sorry guys, but I’m going to have to disagree with Ryan, Sisanie, and the wife here. I believe in giving your spouse or partner in life the benefit of the doubt when you have reason to doubt their actions. You shouldn’t assume the worst, and especially not, when they’ve never cheated on you or lied previously. I didn’t see (Ryan) or his wife questioning whether or not the man had previously cheated or lied to the woman before. If they had, and the man had previously cheated or lied to the wife, then I might have a different opinion on this matter. However, being that to our knowledge the man had never been unfaithful to his wife, he deserves the benefit of the doubt. Therefore, when the wife found her husband in the pool with the other woman, being that the man said that the children just went inside about a minute earlier than the wife walked in, as well as the fact that they were simply talking, the wife should accept it. End of story.

Having said that, I agree with the wife that it’s beyond inappropriate for her husband to be swimming alone in a pool with the other woman, and especially being that they weren’t close friends or anything that she was aware of. I also agree with the wife being able to communicate her feelings to her husband, and that she let him know that she found it very inappropriate. I’m not sure that Ryan’s Roses was the best method she could choose, but okay. I would even hope that the husband would agree that maybe he should’ve thought twice about whether or not it was a good choice to jump in the pool with another woman.

Hopefully he’d realize that it was a bad choice, admit to his fault, apologize, and not do it again. I don’t think that the man was cheating on his wife. However, I don’t think that he should necessarily be in the doghouse in this scenario. Only the husband knows if he was truly flirting or acting inappropriate in any way. However, if he wasn’t flirting, and if he wasn’t physically or emotionally cheating, then I feel that he should be off the hook. But at the very least, I hope that he learns from this, and thinks twice before doing something silly like getting in the pool with another mom on a play date for the kids.

To top it off, and on one last note, I truly feel that it was even more inappropriate for the mother of those kids to get into the pool without the knowledge of the wife of the husband. After all, it’s not as if the parents were all good friends first, and foremost. If anything, this was supposed to be a play date for the children. Having kids of my own and setting them up on play dates, I know that I’d never jump in the pool with another woman’s husband without her knowledge. I might be afraid that she’d call Ryan’s Roses on me.

2 thoughts on “Trusting Your Spouse, and Not Assuming the Worst”

“If you really look closely, most overnight successes took a long time.” 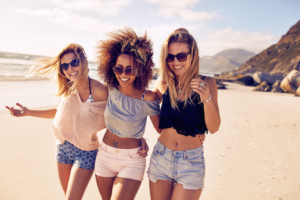 Friendships in LA
Where's the stability.